“Bewafai ati hai tumhe, chor dene ke tareeqe nahi atay!” Loved this dialogue because it explained Faris’ state of mind so well. This man wants closure badly, he is desperate to end this relationship in a way which he thinks is “right”. This last meeting won’t heal his heart but it will perhaps give him a certain degree of control over the whole situation. Love the way Sami Khan has breathed life into this beautiful character and made it even more appealing. Sami Khan is at the top of his game in this play and he has clearly overshadowed all the other actors, at least for now. Mansha Pasha too is making her presence felt with a performance which is subtle yet effective and completely in line with the character she is playing. Imran Ashraf is another actor who is continuously seen in different characters yet he manages to nail every single one of them. Although he got little screen time in tonight’s episode too but these scenes went to show that Tipu has a bigger role to play in the story.

This was another powerful episode of Tau Dil Ka Kya Hua which was directed brilliantly. I am certain that I am not the only one who looks forward to Faris’ scenes and finds his track much more interesting than that of Saif and it is not because Faris is the good guy here but because the different shades of his personality have been penned down and translated on screen so well. You understand instantly what is going through Faris’ mind even when he appears on screen for a few seconds. Like in tonight’s episode, as he was headed towards his office, the expressions on his face clearly showed that he was trying very hard to calm the chaos in his mind while he tried to stay focused. The credit for this goes to the director as well for keeping a keen eye on minor details. The scene in which Faris ends up throwing the cake on Maya’s portrait was another skillfully directed scene, the timing of every action and dialogue was perfect, but too bad this scene had already been shown in the promos therefore his reaction didn’t have the shock value which this scene could have had. The scene from the morning which followed this depressing night was completely different and the decision by Faris to go to work and get things done showed that side of his character which make it more interesting. 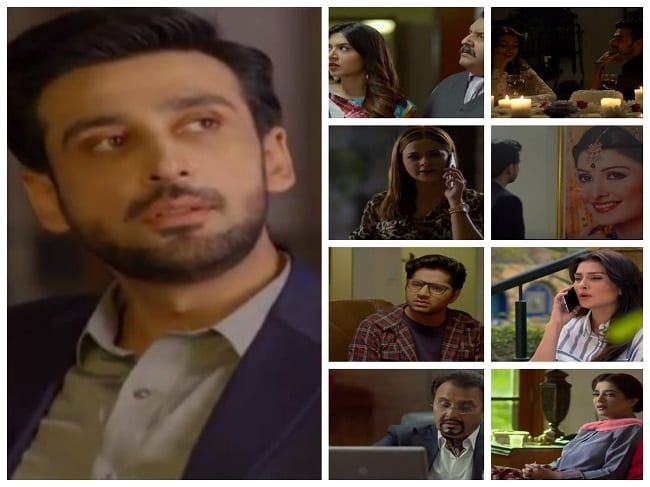 The conversation between Faris and Tipu was another one which I really enjoyed watching and listening to. Faris’ phone call to Maya and the insistence that she should take her part of the share was yet another way for Faris to make himself believe that he still had control over some things. Maya does not care about the money or her position, she only wants to be with Saif. When I saw the promos, I was wondering why would a man throw a divorce party but now given Faris’ state of mind this party makes perfect sense. This would be his way of saying the final goodbye because Maya has given him no other choice.

Am I the only one who feels that there are times when Zahid Ahmed goes overboard. His acting looks a lot like acting at times and there is nothing natural about it. The only scene in tonight’s episode when his acting was right on point was the one in which Muzna’s father threatened him, otherwise I did not find his performance too impressive. The whole situation surrounding his track however is intriguing enough. I really liked the conversation Faris had with Dariya about how their uncle might pressurize them to get married once he gets divorced, I am glad this issue was addressed and it was shown that Faris can predict what will happen once his marriage comes to an end. Muzna’s track so far has to be the most unappealing one and reminds me of Jia’s track in MTSNH.

Looking forward to the next episode of TDKKH and waiting to see how the story unfolds in the upcoming episode. How many of you watched this episode? Do share your thoughts about it.