Tau Dil Ka Kya Hua has some unusual and fascinating characters which keep me hooked to this show. Mansha Pasha’s performance and Dariya’s character, Faris’ character played brilliantly by Sami Khan and even Maya’s character which has gradually grown on me, are three such characters which keep me looking forward to more. I especially like the way these characters are etched-out and the manner in which they have been translated on screen. All these characters are multifaceted which is why they keep me guessing as well. The presence of internal conflict is another reason why I find these characters appealing; all of them are fighting their own wars and so far all of them are struggling! Apart from this, these characters seem like real people stuck in a really bad situation therefore it is easier connecting to them. Saif’s character could have been equally interesting if Zahid Ahmed did not go overboard. He seems to have an interesting background which is yet to be revealed. Also, the unnecessary physical contact between Maya and Saif could easily have been avoided because it does not contribute to their track in any way.

This episode focused on the two main tracks in the story. Maya is gradually realizing that Saif isn’t as trustworthy as she thought he was. Saif’s refusal to letting her stay in the house and later on his disappearance made her question his feelings for her. Also, the reality checks Baila keeps on giving her somehow have an effect on her even though she never listened to her family members when they told her those things. I am glad that Maya has not been shown as a horrible person but she appears to be more gullible than wicked. Maya’s background story revealed that Saif worked really hard to make her come back to him. Their conversation in his flat showed that Maya did love Faris but she also could not let Saif go. Saif convinced her that they were meant to be together and that’s when Maya started falling out of love with Faris. The way Maya greeted her sister and the conversation they had clearly showed that Maya missed everything about the life which she had left behind but she was not going to go back home until she got married. Maya thought that this was going to be a smooth journey therefore she was not prepared for all that is coming her way. “Mein apne yakeen ko shuk mei badalne ki koshish kr rahi hu”! was one of the most interesting dialogues in tonight’s episode. 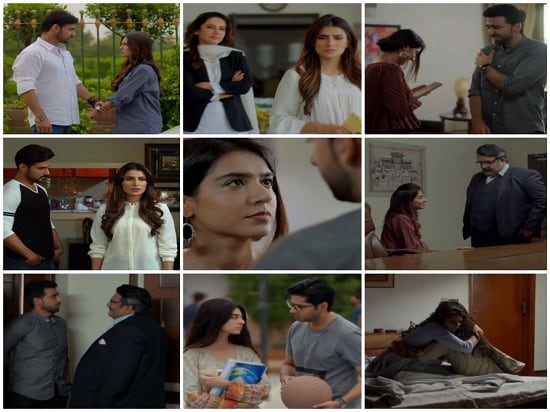 Faris and Dariya keep you guessing about their relationship with each other but these two definitely have great on-screen chemistry which makes their scenes a treat to watch. I am looking forward to finding out what turn their track takes in the upcoming episodes. Faris does not want to get married to Dariya because he feels she deserves better, that is something he has said before too and Dariya is not the kind of girl who would go out of her way to “convince” him that he is wrong therefore I am wondering whether these two will end up together anytime soon or not! Siraj Uncle’s character is a mystery as well, I am sure he has an interesting story to tell.

So far, I am enjoying the slow pace of the drama and every episode gives me a reason to look forward to more. The preview of the next episode looked very interesting! How many women does Saif have in his life? How will he cover up for himself now? What will Maya do if she realizes she has been cheated? Waiting to find out!