Ohkay so, this episode was interesting & better than the previous few episodes because seems like the story is moving forward & a new phase is going to commence. I am looking forward to what they have to offer now as I am glad that the focus won’t be on Nighat anymore.

Honestly speaking, I really hope that the writer doesn’t turn things against Hareem just to prove the point that Nighat was trying to make, because that would be totally unfair for Hareem as she is not the culprit but the victim here. I don’t know why but I have a feeling that the writer has more sympathies towards Nighat in stead of Hareem, that is why every conversation that Nighat has with Hareem ends up making Hareem look like a villain & Nighat as a victim who is trying her very best to make amends. The scene where Nighat goes to tell Hareem about her Mayun function was again a very poor attempt done by Nighat because in stead of praying for her daughter & wishing her well, she tried to scare her using her temperament as a reason. Nighat thinks Hareem is only going to make things difficult for herself & she also dreads that karma will get back at Hareem? What sort of a mother says such things to a daughter that is going to get married? In stead of making her understand nicely & telling her how much she loves her daughter, Nighat once again went on & on & on about all the shortcomings she thinks Hareem has & in the end, as always, Nighat being a victim of self-pity only cried at the so-called misery that Hareem put her through! 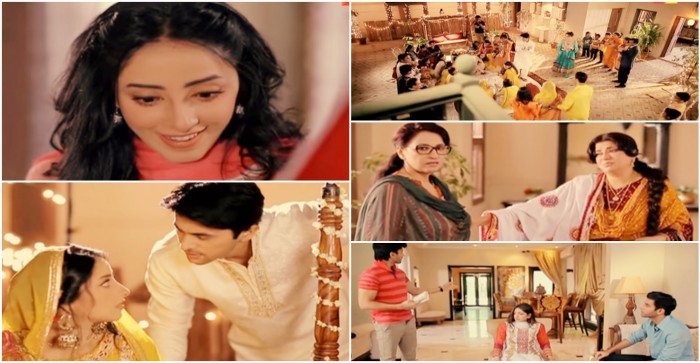 Nadia is becoming a drama queen as the days are passing by. The way she is over reacting at the thought of Asad liking Hareem is only showcasing what an insecure woman she is. I really must say, I hate the way both Nadia & Sadia show no confidence in Hareem that if she likes Fahad, she is going to stick to him no matter what. It is very sickening that Nadia thinks just to put her down, Hareem can even ditch Fahad & get married to Asad? What sort of a mentality is that? I heard Nighat talking about educating her daughters but the way both Nadia & Sadia, especially Nadia behaves doesn’t really show that she is educated. In this regard, I find Hareem more confident, secure & level headed that she is at least doing what she wants, unlike Nadia, the so-called educated & groomed girl who is only depending on her mother to take care of her & is plotting against Hareem so that she gets rid of her. I think they don’t have much to show in Nadia & Ali’s track, that is why a very nominal matter of Asad liking Hareem is being blown out of proportion so that Nadia stays in the picture!!!

For Hareem’s sake, I so wish Fahad wasn’t such a loser. He really knows what he is doing but I so hope that after finding out the truth about Hareem’s terms with her uncle, he forgets about his motive of grabbing her property & gives her the love she deserves. I really think the writer is going to make Hareem face these hardships just to make her realize that she was wrong & she gave her mother such a hard time because in reality, it is the other way round. Hareem had a disturbed childhood because of Nighat’s negligence & inconsideration, so if now Hareem gets back at her & confronts her, I really don’t see her at fault here! 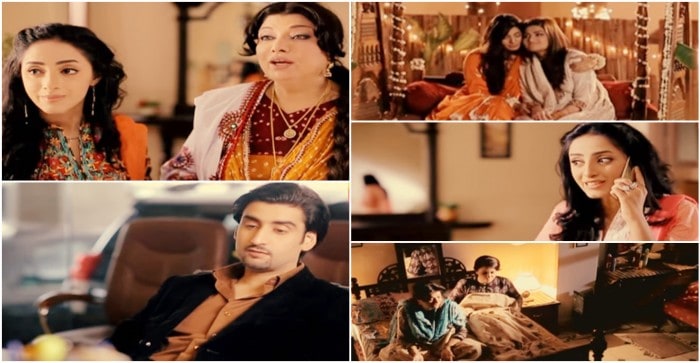 Oh well, the final confrontation between Hareem & Nighat was done beautifully & I must say, Sanam Chaudhry has won me over with her flawless acting. At certain point, even I had teary eyes because there was so much heart & soul in her confession. Sanam Chaudhry should take a bow for such a phenomenal performance in the entire drama but in that scene in particular. I loved everything that Hareem said to Nighat & gave her a reality check that she isn’t that much of a victim that she thinks she is because the truth is totally different. Hareem is justified in drawing a line when it comes to Nighat, Nadia & Sadia because she has only experienced hurt & hesitance from these three ladies, that is why she doesn’t allow herself to get swayed by the emotions because she fears she will get hurt again. I love how Hareem’s defense mechanism works because she is totally entitled to save herself whichever way she wants in order to protect herself. In stead of crying on how Hareem treats her, they should show Nighat crying apologetically for being an unjust mother. It is so obvious that Nadia & Sadia are more dear to her, that is why even now when her heart is not at rest & she is dreading that something bad will happen to Hareem, she has agreed to her marriage with Fahad without doing much of a background check, why? Because her dear daughter Nadia is uncomfortable & wants Nighat to get rid of Hareem ASAP. I loved the way Hareem told her so-called mother that she loved her the most & that she longed for her the most too but the same realistic approach that Nighat opted for to tackle Hareem throughout her life turned out to be one of the main reasons of Hareem drifting apart from her. Also, I don’t really understand why Nighat has to show hesitance in displaying her love to Hareem every single time because when it comes to taunting & giving Hareem the not-so-needed lectures Nighat doesn’t bat an eyelid & says everything that comes to her mind, without even bothering how much it would hurt Hareem? I really think Nighat has failed as a mother & that is why if Hareem treats her this way, then it is purely her fault because Hareem has had enough & Nighat didn’t leave an opportunity to make her realize that she isn’t as special & as dear to her as Nadia & Sadia are.

I really hope that now when Hareem faces difficulties after her marriage, Nighat doesn’t rub it on her face because if Hareem was irrational in making a decision to get married to Fahad, Nighat was equally irrational too for not doing a background check properly. The conversation Nadia & Sadia had about Hareem & Asad was so not required, like seriously, your sister is getting married & you’re still worrying about the hypothetical equation that Asad & Hareem might share. Ohkay, if they want to keep an attention on this fact & want to blow it out of proportion, then I really hope that after Fahad leaves Hareem or vice versa, Asad comes to her rescue & Nadia gets a shutup call for life because, if there’s someone who deserves happiness, it is Hareem!!!

Overall, this episode was good & the preview showed that Nighat’ll be getting some more self-pity time in the next episode as well. I must say, Sanam Chaudhry looks absolutely beautiful & her makeup is on point. She really has carried this drama on her shoulders due to her flawless performance & she is turning out to be quite an eye-candy! Please share your thoughts about this episode of Tere Mere Beech.