This week’s episode was beyond depressing! Maryam was on top of this world when her daughter Ashiya was born and Zayaan came to meet her in the hospital in high spirits. Her relationship with Zayaan had been strained for the past few months and she was happy to see that Ashiya became the reason for the change in Zayaan’s attitude towards her. But sadly, the change in his attitude did not last for long. 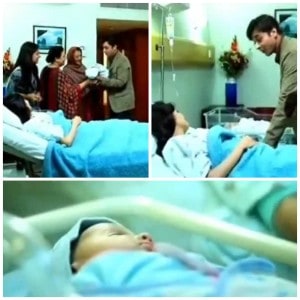 Nusrat wanted Zayaan to know about the birth of his daughter as late as possible so that Maryam would be kept waiting at the hospital but her plan was unsuccessful as Amna called him and informed him about the good news, and he immediately rushed to the hospital. After her first plan failed, she quickly thought of a new plan. As soon as Zayaan came home, she started her melodrama about ‘not being told about her grand daughter earlier’ and asked him to bring Maryam to their house immediately.

Afshah and Nusrat’s treatment with Maryam after she came home was just terrible, I could not help but pity Maryam’s situation. Nusrat was taking such good care of her daughter while Maryam was neglected and nobody bothered about her health. Maryam was ordered by her mother-in-law to start working as soon as she came home from the hospital. Nusrat simply showed no pity towards Maryam even when she saw that all the work is taking a toll on her health. Nobody was even ready to offer her some help; when she asked Afshah to take care of Ashiya for a little while, she rudely told her that she cannot handle Arij and Ashia at the same time. Even when she went to Afshah’s room to see Afshah’s son Arij for the first time, she made it clear that she was not welcomed there. On top of that, Nusrat also did not forget to taunt Maryam about coming to meet Arij for the first time empty handed.

Khurram’s whole family came to Zayaan’s house for dinner to congratulate him on the birth of his daughter and while everybody was playing with and praising Ashiya, Maryam was standing nearby and enjoying the scene until Afshah told her to go and serve dinner. Maryam desperately wanted to be part of the celebration and she looked longingly at them from afar with tears in her eyes.

There was absolutely no expectation from Nusrat that she would take care of Maryam, but Zayaan should have at least thought about Maryam’s health. Maryam was busy looking after the house the whole day and then she used to be up all night because of Ashiya. If this was not enough, she was also given the responsibility of Arij when Afshah was unwell. She just looked wishfully at Khurram when she saw how he took care of Arij and was up because of him the whole night so that Afshah could rest. Her case was just the opposite; when she fell asleep because she was unwell, Zayaan accused her of not taking care of his daughter well because she did not want a child in the first place. Her words hurt Maryam a lot but she knew that there was no point saying anything to Zayaan to convince him of her innocence.

Instead of understanding her situation and taking care of her, Zayaan constantly blamed her for being careless and when she got extremely sick, he even got angry at her for not telling him about her deteriorating health! She then clearly told him that she had no time to look after herself because she had so many responsibilities and even this offended him. Everything that Maryam says or does now offends him, thanks to the brain washing done by Nusrat. The only thing good in the episode was that Zayaan is no longer paying any attention to Faiza.

The preview for the next episode is pretty shocking as it is a twist I did not expect. I really hope nothing happens to Ashiya because of Maryam’s condition. Let’s see what happens next!